(I'm learning English. When you find a strange expression, tell me how I should write.)

There is a place which is called "Battery Spencer" in the north side of Golden Gate Bridge.

That day, I went to UC Berkeley. My friend guided me around UCB.

Friend "Have you been to the opposite side of Golden Gate Bridge? There is a great place from which you can see a great scenery!"

We decided that she would drive me to the place. Thank you really very much.

We were driving fast on the free way to the north side of Golden Gate Bridge at a speed that I can't know.

Because we started from UC Berkeley, we didn't cross Golden Gate Bridge.

By the way, the reason why I couldn't know the speed is the indicator was in Miles.

Arriving at the hill, I found that there are no lights.

There was a park and there were some people. It seems be famous place.

Friend "Isn't it cold? You can wear this."

I wore that parker. Thank you really very much.

OK, I've already set all the camera stuff. Let's go to the tip where some people are.

It's very late and this is middle of the hill, isn't it?

In addition, this is a foreign country. If something happens, things such as insurance will be in very bad situation. Is it OK? (I'm thinking about myself)

Friend "I'll fix the situation. You can go there and take pictures."

Is it OK that I leave her alone in this dark place? In order to take pictures as my hobby? 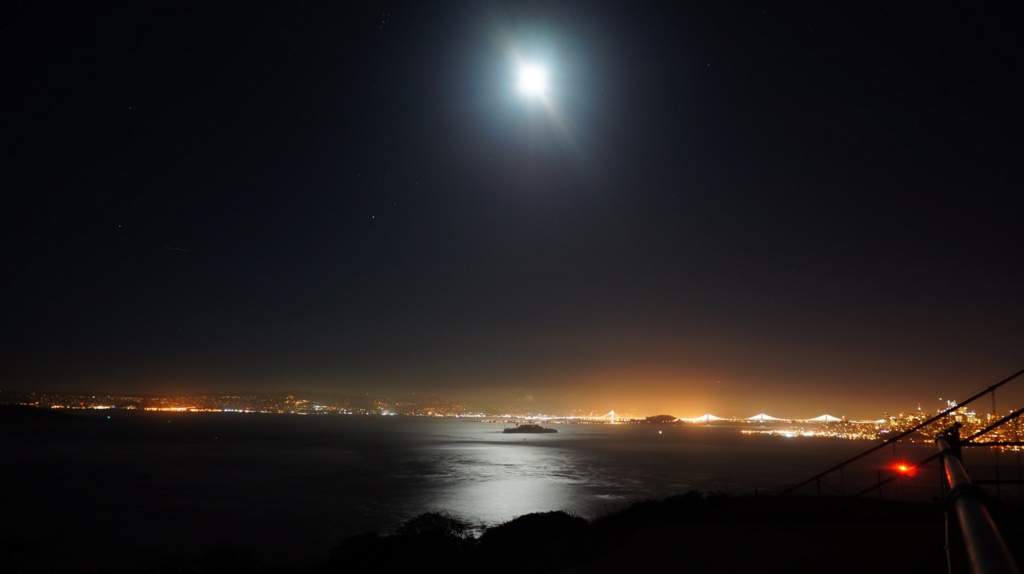 As you can see, it's very beautiful.

the light of the moon

It was almost full moon this day, so the moon was very bright.

The sky was very clear and I was able to see the Summer Triangle.

Thanks to the moon, I was able to see the ground and walk.

There were some structure and stairs of concrete on the way.

Me "What are these? There are no people. It's completely dark and very creepy. There isn't concrete pass. These doesn't seems to be developed for visitors."

I could see the lights of San Francisco at right angles.

This is very nice! I'm glad I could come here!

The picture below is I took after setting the camera on Gorilla Pod and adjusting the shutter speed and diaphragm. 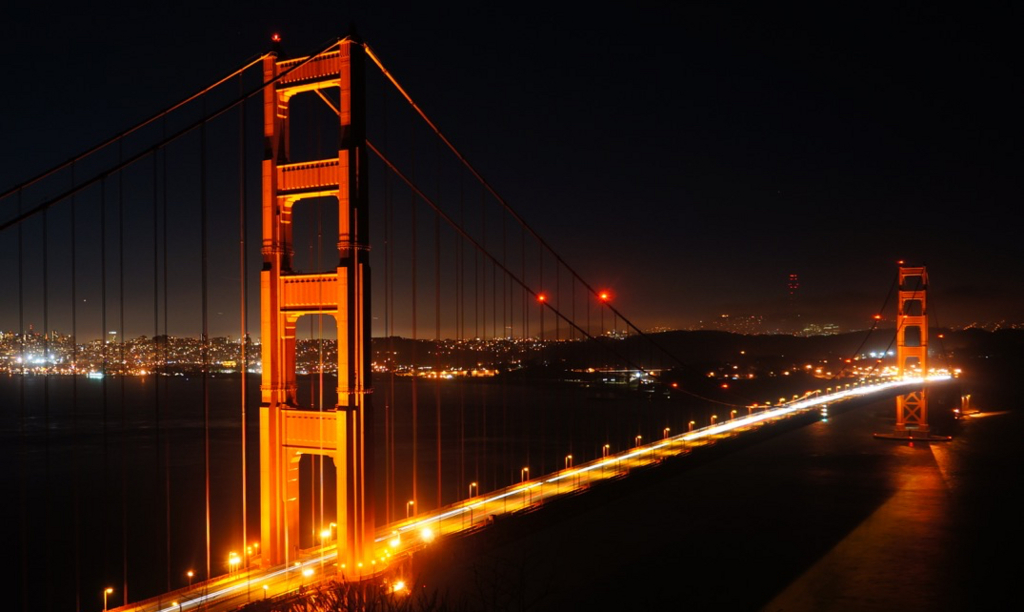 As you can see, This is very nice!

I didn't know that Golden Gate Bridge was lit up by orange light to make it beautiful.

Then, I was able to take a good picture and started to go back to the car under the moon light.

She said that she would make it. How about it now?

It wasn't in a good situation

Friend "I called many lock smiths but they said that this is out of the range. One company said that they will call back after they find a technician who can come here, but no one called back!!"

It can't be helped, so we decided to go to the tip together.

She took some pictures and started to call lock smiths.

Friend "Like I said, I called you several times!"

Friend "You said that some one will call back, but no one called back!"

Me "Did they say someone would come?"

Friend "Yes. They said so"

Me "How long does it take?

Me "We can wait for 25minutes. Thank you for everything."

While walking back to the car, I had another problem.

In fact, I wanted to a restroom while dinner, but I thought It would be OK till arriving at home and I didn't go to a rest room.

However, It was a different story because we had to spend time there.

For 25minutes. I could wait for the lock smith, but I couldn't endure pain.

I began to search for a restroom alone.

I didn't think there was a restroom there. There were no even traffic lights in the middle of a hill.

That's very scary...there are no lights... Can I come back after doing it?

I'll bet there is a restroom in a concrete structure in the way to the tip...

I began to walk to the nearest small concrete building.

It was very scary because I had no idea about that building.

I checked inside after arriving.

Actuary, till that time, I had saved batteries of my smartphone and portable power.

I finally used the flashlight of the portable power.

The first thing I saw after lighting was...!!

Hey, isn't this a restroom?

And... There are only restrooms in this building, aren't there?

However, the restroom was very scary.

Because there were no lights, I couldn't see anything when I turn the flashlight off.

I did it with holding the portable power.

I didn't close the door lock because it's very scary if it couldn't have been open.

The picture below is the restroom.

I made it a link because it's very dirty.

the picture of the restroom

Finally, The lock smith came and opened the lock.

It would be very hard to wait there if I were alone.

The method he opened the door looked very easy. I don't write it because of prevention of crimes.

I understood why you shouldn't leave valuables in the car.

After that, we could go back to San Francisco by crossing the Golden Gate Bridge.

By the way, What is Battery Spencer?

It was concrete gun battery.

This place seems important because this is the entrance of the bay. I don't know well.